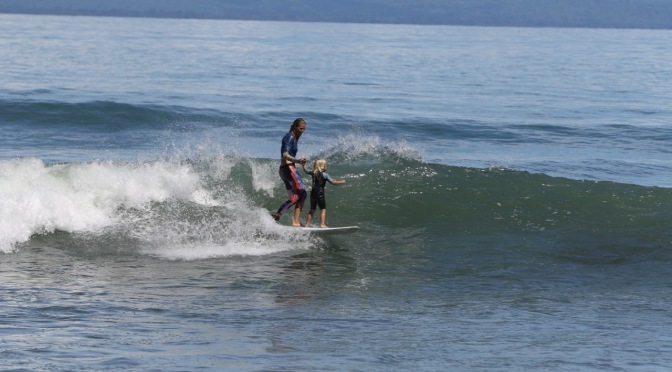 As a mom (or dad) who surfs, most of us dream of being able to share our love of the ocean and riding waves with our kids.

Luna is now three and a half, but she’s been surfing since conception. I rode waves with her in my belly up until I was 32 weeks pregnant and just no longer able to comfortably paddle or pop up. Here’s the video:

Once she was born, I started counting down the days til I could get her out on a surfboard with me. We tried it the first time when she was 10 months old. I sat on a big wide 9’6 longboard in the whitewash of a sandy bay and had a friend push us into a few waves. She wasn’t crying, but she wasn’t overly stoked either. She basically just looked around taking it all in as we rode a few waves. The whole story is here.

From there we waited a while until she was big enough to actually talk and ask about surfing with mama. It seemed to me that it wasn’t the surfing she actually wanted, but just to be with me, and if I was going surfing then she’d deal with it in order to not get left on the beach while I ran towards the ocean. One day at age 2, we actually got her on a board solo and pushed her into a few whitewash waves. It was a two day thing. She did it two days in a row and then never (even up until now) wanted to do it again.

Little by little, every few months we kept it going. I found that she was the most stoked and confident riding on my back. I’d throw her on there piggy back and we’d paddle out. We’d ride whitewash on the inside or if the waves were really small, we’d paddle outside and try to ride a few green waves.

From there we just took it slow. I’d ask if she wanted to surf with mama and most of the time she’d say no. But if she ever did say yes, we were on it right away. At age 2.5 we scored this amazing awesome wave in Costa Rica with her on my back.

From there it was nearly a full year until she started wanting go surf with me again. This brings us to the present. She’s now 3.5 and has been asking me to surf everyday!!! I think the difference is that she has gotten a lot stronger, she’s a better swimmer, and she’s just old enough to trust me and believe in herself. She still gets scared sometimes. She does not like going underwater, so I do my best to avoid having to duck dive or go under any waves. But, the times that we have had to duck dive, she handled it!

We started working on her riding in front of me on the board. I paddle into the wave, pop up, then grab her arm and help her to stand and then we ride standing together. We had done it a few times until this day when there was a photographer present to capture the moment. These waves were pretty big, but the spot has a great channel so we could paddle around the sets and choose the perfect wave to ride all the way in.

The next day the waves were smaller and cleaner. We were actually waiting for the sets and we scored a few amazing waves. I had noticed in the photos from the previous day that she was looking down. So this day every time we popped up I told her “look at the wave” and would point down the line. 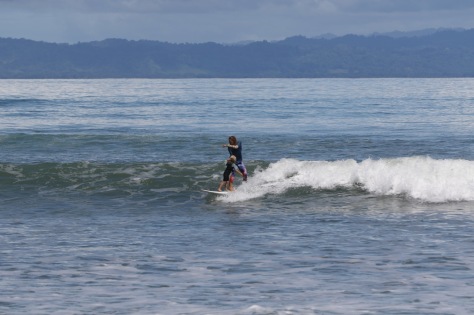 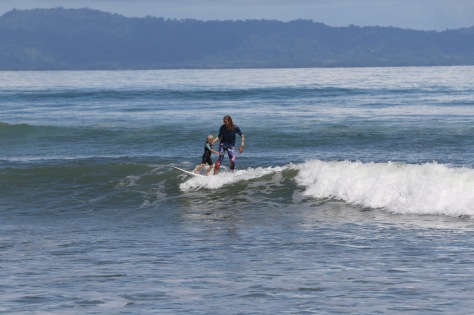 Our last wave went right. She was so used to looking left that I had to tell her “look the other way!” She looked up at me, “what mama?” and I pointed right and then she turned and looked right with a big smile.

I’m having so much fun surfing with her, and the best part is that she is having fun too!