When we planned to head back to Los Angeles for Christmas I was really excited to pull on a thick wetsuit and paddle out into the cold clear kelpy water. The beach is so hot in Nicaragua and I was looking forward to bundling up my little bundle and chilling along the Southern Californian coastline.

Luckily, the first few days we were in town were blessed with a small groundswell. The Palos Verdes cove was rolling with gentle waves, perfect for longboarding. I borrowed one of my old boards that i’d given to my sister. It was pretty beat up and after only a few waves I turtle-rolled, the wax-less rails slipped out of my hands, and somehow the board broke just in front of the fin box. The tide was dropping, the waves were getting better, it was my husband’s turn to surf, and we were down a surfboard. Bummer! It did make a nice shady spot for a much needed nap for the little girl though.

My husband Kim swam out to relieve Hayla (who was suffering from a cracked rib sustained on a boat trip in Nicaragua) of her surfboard, and Luna and I chilled on the beach. Hayla snapped these three photos. I can’t decide which one I like best.

Before making the long walk back up the trail, we snapped a family photo. It was an awesome way to spend Christmas Eve 2014! 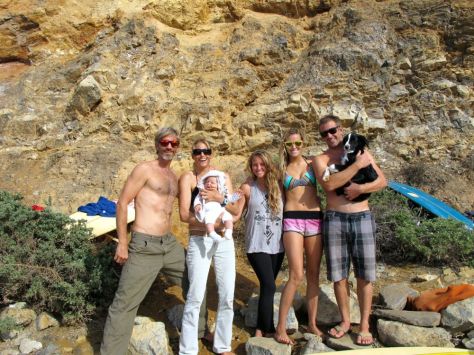 One thought on “Luna Goes to the Cove”